The Style Advisor
0 COMMENT
942 Views
A fabric of different cultures, Jordan will amaze you with its variety. A little bit of Greek and Rome, dollops of Nabataeans and topped with Biblical sights, Jordan is a travel lover’s paradise. And then there are deserts, valleys, mountains and oceans that vie for your attention. If you are visiting Jordan, here are 6 sights that you must not miss as each of them gives you a different perspective of the country. 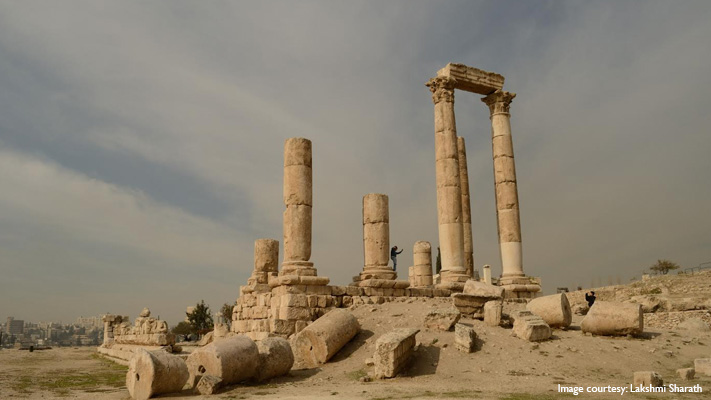 #1 The Citadel
Amman’s landmark destination, The Citadel, dates far, far back. Trace the history of Amman down the eons of time with a visit to the museum, and you’ll see on display one of the oldest statues ever made by man! But it is the monuments in these vast, open, L-shaped hills that will take your breath away. The towering temple of Hercules, of which only his massive fist remains, and the Umayyad Palace are some of the main sights here. #2 Jerash
A Greco-Roman city in Jordan, Jerash was probably inhabited during the Bronze Age. So many towering temples, columns of pillars, streets and mammoth walls greet you here that you almost wonder if you are in Greece or Rome. The first thing to see is Forum, which is surrounded by a colonnade. The Corinthium columns, the hippodrome, the temples of Zeus and Artemis and the Hadrian’s Arch are some of the must-see sights here. #3 Petra
Walking through this ancient Rose City, touted to be “half as old as time itself”, through the mountains is an experience in itself. Petra, now part of the New Seven Wonders of the World, is the capital of the Nabataeans and dates back to around 1st century AD. It is impossible to see Petra in a day, but if you have to explore the UNESCO World Heritage Site in a short span of time, then you must see The Treasury and the Monastery for their architectural splendour. #4 Madaba
The first thing that you’ll notice in Madaba are quaint colourful shops selling mosaics of almost everything—from landscapes to monuments to people, even Marilyn Monroe! The Biblical tour of Jordan usually starts with Madaba, the city where mosaics describing the Holy Land were discovered many years ago. The Madaba Mosaic map showcases the 6th century landscape of the region with hills and valleys highlighting Jersualem, The Holy City of the Byzantine era. Preserved in the Greek Orthodox Basilica of St George, you can also visit more churches to see other mosaics here.

#5 Dead Sea
If Petra is the most iconic sight of Jordan, then floating in the Dead Sea is probably the second most touted experience. Although the latter is shared with Israel, Dead Sea or the Sea of Salt is also a part of the Biblical Jordan tour. The salt and the minerals have, however, converted the Dead Sea into a wellness destination, having been referred to as the first health resort apparently patronised by Herod the Great. #6 Wadi Rum
One of the largest Wadis of Jordan, Wadi Rum is simply breathtaking with its landscape of massive sandstone rocks and granite boulders. The Valley of Moon, as it is popularly referred to, is a favourite among trekkers and for those who want to enjoy the wild outdoors. Watch the sunset, camp under the stars, stay in a tent with a Bedouin or just go for a desert safari ride. It is the best way to end a jaunt in Jordan.