The Style Advisor
0 COMMENT
1257 Views
The current generation BMW 3 Series has been well accepted and this sports sedan has been on Indian roads for some time now. Known for its superior road handling and sport car precision driving manners, this model has been the most successful model for the company since it was launched in 1975. Now in its sixth generation, the current model continues to make everyday drive more exciting. While the two-litre diesel engine is the most popular model in India, the car is also available with a supercharged two litre turbocharged engine that produces an amazing 245 bhp and is sold as the 328i. The car is visually exactly the same as the diesel-powered car, except for the moniker on the tailgate. Get comfortable, press on the brake and push the starter button. The motor starts up with a mild roar and quickly settles into a rhythm. Driving through the city, the car is fuss free and the leather wrapped sport steering is easy to manage. The Variable Sports Steering exclusive to the 328i provides different gear ratios depending on the angle of the steering wheel so that the car responds more directly or more softly to the driver’s inputs. This translates into reduced steering wheel rotations required for turns, thus making it easier to park and turn.
The ideal rear wheel drive setup with balanced weight distribution between the front and rear enhances the ride and the handling capabilities. Riding on 18-inch wheels fitted into 225/45 R18, the drive in the city is on the firm side, and you will feel bumps and undulations; however, only a few will rattle you inside the car. The eight speed automatic transmission does a fantastic job of keeping you in the right gear at all times. Out on the highway, the car seems to be glued to the road and handles beautifully through corners. Shifting into sport mode adds to the directness of the steering and reduces the time to transfer power to the wheels. 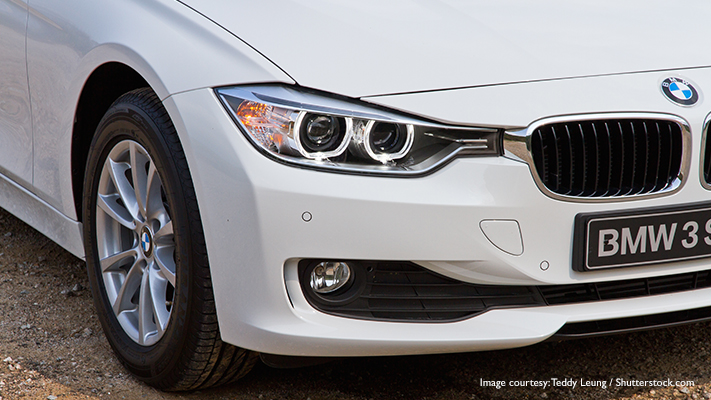 Apart from fantastic performance and mechanical superiority, the car is loaded with driver conveniences, safe mobility systems and intelligent connectivity. Featuring a heads-up display with full colour display, the system projects key information in a sharp resolution onto the wind screen, which appears directly into the driver’s field of vision without being intrusive. The car links to your external devices for telephony, playing music and displaying text-based messages such as SMS and emails. The BMW-connected app allows the use of web-radio as well as social networks such as Facebook and Twitter.
All in all, this is a fantastic car with performance barely below the category of a sports car while being peacefully silent. It gives reasonable mileage if you can control the hooligan on the driver’s seat yet comes with four seats and is disguised as a sedan. A great combination worth considering before checking the oil-burning engine option!