For 18 years, I stood at the helm of SW19 with the same feelings zipping through me as would in a kid on the first day of his exams: a concoction of jumpy excitement and the inexplicable rush of being at the cusp of a life altering event. Yesterday, although I wasn’t the one playing, I experienced the same emotions while watching the opening of Wimbledon 2014—a tournament synonymous with excellence.
Every year, the ceremonious celebration of tennis undoubtedly outdoes itself, keeping with tradition. This year, though, I felt that the coming together of talent, sportsmanship and fandom culminated in an anthem for players to synchronise their own anticipations and emotions with. I spent each passing moment reflecting thoughtfully on every contender’s expectations as heaps of pressure builds in the promise of what is to come. The ensemble of players at Wimbledon 2014 holds the promise of a grand display of talent in the days to come.
As the eye meanders away from the bright lights, I see the Big Four standing with a sense of nervous calm on their faces, each laden with confidence of the past and worries of the future. The pride in the air around Rafael Nadal does not escape the eye. The King of Clay definitely looks confident after winning the Roland Garros Cup earlier this month. While that puts him in a comfortable position, his recent record at Wimbledon has not been very impressive—despite his appreciable performance on grass courts. However, Nadal’s repertoire of credits speak for themselves—and, I can surely say he is waiting to relive 2010 and get closer to his arch rival, Federer, in terms of the record number of titles.
Nadal’s most recent opponent in the French Open, Novak Djokovic stands tall despite the defeat, his expression clearly suggesting composure usually seen as the calm before the storm. Ready to play his tenth Wimbledon, Djokovic will be looking to return lost glory to Serbia after he lost last year to Andy Murray, and avenge the June 8 this year from Nadal. While these two are the top favourites, Andy Murray and Roger Federer are not too far behind. Having slipped eight ranks since his historic win last year, Murray, the defending champion, is expected to make a strong comeback. He looks determined to defend his title and tell the world that 2013 did not happen by chance. Poised currently at world number four, Roger Federer is a happy man with lots happening on his domestic front, and seems set and excited to win his favourite tournament for the eighth time. As he would be praying to pull off another 2012, the simmering undercurrent of worries concerning his struggling form despite the win in Halle were not inconspicuous. While these heroes walked around the stadium amidst drum rolls, the up-comers maintained their stoic poses, reading carefully their opponents, both old and new. 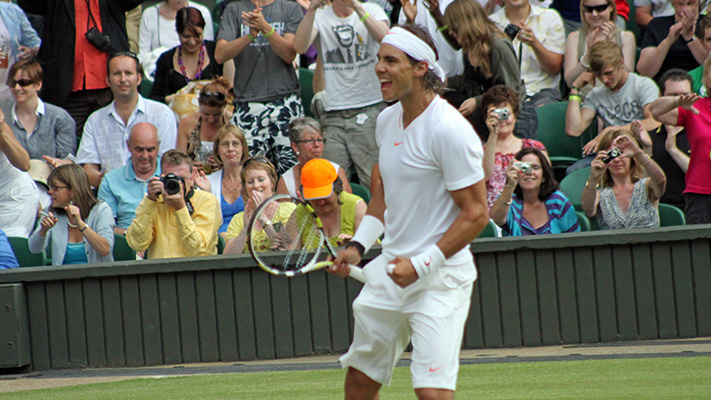 Apart from these giants, there are some notable players who are expected to upset some seeds in this season. Among these, I feel there’s potential in the likes of Jo-Wilfried Tsonga, Nishikori, Gulbis, Grigor Dimitrov and David Ferrer, all coming forth on the lines of what Stanislaus Wawrinka sought.
Far into the sea of people I am able to spot the shining star of Wimbledon, ranked World No.1, Serena Williams. After an early upset last year, Williams clearly looks anxious to get back to the court and reclaim the title she has won five times, the recent most in 2012. Close to her, gleaming with pride after winning the French Open is another favourite, Maria Sharapova. Her face visibly exuding confidence, she goes in this year to avenge last year when she was unceremoniously sent packing after the second round. Her recent rival, Simona Halep is also in the running to create some stir this season. After nearly missing the French Open earlier this month, her poise suggests she is waiting to get back to action and break her own record by moving past the second round this year.
The flux in the field is a rather inspiring tale—because the game has always ultimately remained the star—the players themselves have been ambassadors of Tennis, and encouraging talent has never come at the cost of the nobility that is inherent in the game. As I looked around, my sight bouncing from one player to another, I relived my days filled with chilling apprehension and excitement for the recurring celebration of Tennis that is to repeat itself in the two weeks ahead of us. With the promise of passionate games and an unprecedented spirit of sportsmanship, I look forward to two weeks of yet another season in pursuit of excellence.

Lechal: Shoes That Will Never Let You Get Lost Again