The Style Advisor
0 COMMENT
1179 Views
BMW has been making roadsters since the 1930s. Winning the 1940 Mille Miglia open-road endurance races with the BMW 328 was the start of several high points for the brand. Fast-forward to 1987 when BMW showcased the Z1, which was unique for doors that would drop down into door sills. The Z1, more importantly, showcased BMW’s ability to make precise-handling cars, and this concept gave birth to the legendary Z3 and Z8 that were featured in James Bond movies and sold through the 1990s. 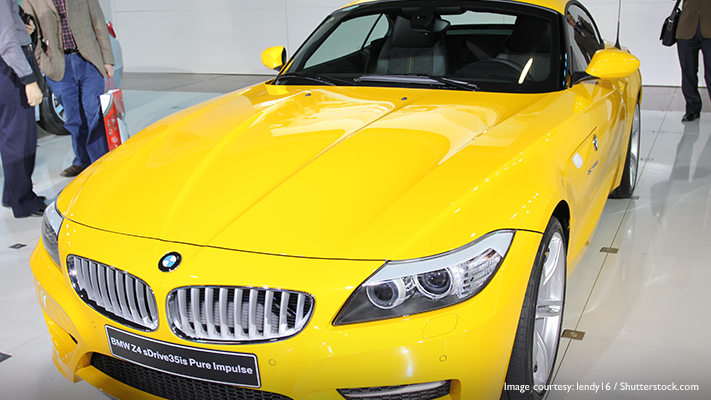 The ‘Z’ in Z1 stood for Zukunft (meaning future in German); after all, this line of cars featured technologies and designs that were forward looking. In the Z4, much in the same vein, BMW has for the first time introduced a retractable hard top. The styling is executed to the T, with classic proportions featuring an extended bonnet, a long wheelbase, a low shoulder line and a low-slung rear. The distinctive BMW twin circular headlamps seem to encompass the large silver finished kidney grills, which, in this iteration, seem like a shark is ready to attack!
Two creases work their way around the prominent BMW logo and expand as they cover the length of the bonnet to provide drama to the large, slightly rising hood. The three-quarters view features a strong crease around the fenders all the way to the bulging rear-wheel arch. The tail is finished with two exhaust pipes peeping out of a large rear bumper and bug-eyed tail lamps with LED lights. The light alloy 18-inch wheels with multiple spokes look lovely and add to the overall design sense. Added to this visual drama is the sense of being “part of the car”, with the cabin situated just ahead of the rear axle, giving the driver and the passenger a particularly intense experience of the lateral and longitudinal forces working on the rear wheels. This, they say, is the recipe for that roadster experience, BMW style!
Step in through the large doors, and once inside, you will notice the extremely lively aura featuring a contrast of black and orange. The black full-leather seats have an orange stripe running through the centre and the bespoke Alcantara door trim also comes in orange. The iDrive control system’s folding screen pops out of the central console and provides navigation, function and entertainment information. The switches all follow a circular theme and are neatly placed within easy reach of the driver. The cabin, however, lacks space, and carrying even a shopping bag begs the question: How large is the bag? There is a small shelf that runs behind the seats, but it is insufficient. The boot too is tiny and at most will swallow a small duffel bag. Getting to business, power the car and you’ll be greeted by a welcome roar from the 3-litre six-cylinder inline engine, which features twin-scroll turbo charging, direct injection and fully variable value control. The seven-speed sport transmission helps put the power to the road. With a 0–100 kmph in 5.1 seconds and a governed top speed of 250 kmph, this is one pocket rocket!
Slot it into Drive, tap the accelerator and the car lunges forward as if it senses a kill! Show it an open road and it will devour it in no time. Driving this car for a while will slowly make you realise what BMW means by feeling like “part of the car”, as you sit low and need to look over the bonnet to see the road. The compact surroundings of the cabin escapes as you open the hard-top roof to let the weather in and feel part of the sky. The gear shift is precise and the car seems to innately understand what the driver wants to do and does it for you. The brakes are strong and reassuring. Did I mention the stares from the other road users as we swept past them? Perhaps the only thing they had the time to notice was the colour of the car! A fantastic package in all, driving this car is like unravelling her personality and she is always ready, whether you decide you want to give a chase or do the chasing!
Take your driving experience with the Z4 up a notch and make a sophisticated picture with these stylish accessories.

And the Oscar goes to…..