The successor to the Lenovo K900, the Vibe Z is Lenovo’s new flagship smartphone, decked with top-of-the-line hardware to take on the big boys. But is that enough to make you buy this over a Samsung or Sony?
Look and Feel
The Vibe Z trades in its predecessor’s brushed aluminium and sharp edges for a plastic body with rounded edges. In looks, it’s not as gorgeous as the K900 and doesn’t ooze a premium feel. On the other hand, it’s much lighter and the rounded edges are more comfortable. It’s approximately the same size as the Samsung Galaxy Note 3. So you won’t be able to use it with one hand.
Screen and Sound
With such a huge size, you should hope for a large screen and the Vibe Z doesn’t disappoint. The 5.5-inch IPS display has FullHD resolution (1920x1080pixels) for sharp images and impeccable colour reproduction. The viewing angles aren’t great and the sunlight legibility could be better, but neither are deal-breakers. Unlike many smartphones in this range, the Vibe Z has a particularly loud ringer that you’ll easily hear two rooms away. The K910’s audio output is clearly better than its rivals. Fair warning though: the packaged earphones start distorting at high volumes, so you’ll be better off using your own headset.
Camera
The camera is the highlight of the Lenovo Vibe Z. On the back panel sits a 13-megapixel sensor that takes photographs with the most amount of detail seen on any handset besides the Nokia Lumia 1020. The colours are good even in low light. It takes a while to focus, but it’s worth it. The front camera, is a 5-megapixel sensor with a wide-angle lens, which makes it easier to shoot selfies with people around you. Special mention should be made of Lenovo’s superb Camera app. It’s far superior to the stock camera app—easy enough for amateurs, but also offers tools for advanced shutterbugs. You can set the white balance, play with light metering, make GIFs, and shoot from the front and back cameras simultaneously. 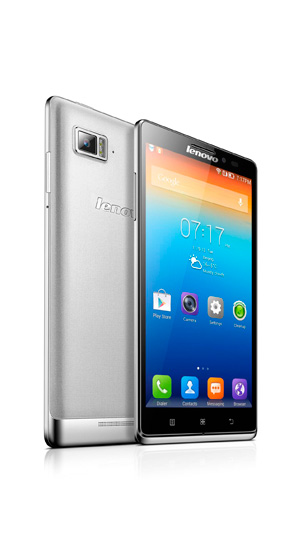 Interface
The rest of the device’s software are a disappointment. The custom user interface is a departure from Android, to an extent where it stops feeling like Android. The changeable themes are gaudy or outdated, the icons don’t have a uniform look with other Android apps you download. Moreover, the rounded edges on all app windows look out of place and jar against the flat lines of the notification bar. We wish we could switch to the regular Android look, but alas, you’re going to be stuck with the customisation.
Memory
With a 2.2GHz quad-core Qualcomm Snapdragon 800 processor, the Vibe Z is capable of running any app and game at its optimum settings. And with 2GB of RAM to back it up, multi-tasking is a breeze. The problem lies in the limited 16GB of memory, since there’s no microSD card slot to expand it. Of the 16GB, only 12GB is available to the user, which fills up fast.
Battery Life
The 3000mAh Lithium-Polymer battery can’t be replaced, but you’ll probably never need to do that. It easily lasts for a full day’s worth of usage, and charges pretty quickly too. The only problem is FullHD gaming, which rapidly drains the battery.
The Verdict
The Lenovo Vibe Z K910 certainly has all that can make it a challenger for other flagship smartphones. The only problems are the limited built-in memory and the ugly UI. But if you can deal with those two, then you get a big-screen handset with fantastic hardware, a great camera and a long-life battery, for ₹36,000. Not too shabby!