Beer is an easy drink. Perfect for a summer day or night—or just about any time of the year for many—this frothy beverage produces an alcoholic high that’s not too hard on the senses. As relaxed as that might sound, the entire process of drinking beer—storing the drink, choosing the right glass and pouring it—is more complex than you imagined it to be. Here’s what you need to know if you want to better enjoy that beer you plan to drink this evening.
To chill or not to chill
Beer should be drunk at its coldest, only if you plan to down an impressive number of macro-brewed beers (you know, the mass-produced kind that tastes awful when warm). That’s because your taste buds turn numb when you consume anything that’s really cold. This lowers your ability to perceive the beer’s flavour and aroma, both of which aren’t exactly a treat—a realisation that might have dawned upon you once you stopped drinking anything that came your way. Now if you’ve acquired a taste for some of life’s finer things (and we sincerely hope you have), you’ll need to up your game on this front. The optimum temperature for storing craft and high-end varieties of beer is 12-14°C higher than most fridges. A mini beverage chiller with temperature control will do the trick.
Get it right: If you can’t manage to cool your beer to the optimum temperature, you could still do your taste buds and olfactory senses a favour. Remember that light-coloured beer tastes best when served cold, while darker, heavier beer tastes just fine even if cooled for 30 minutes. 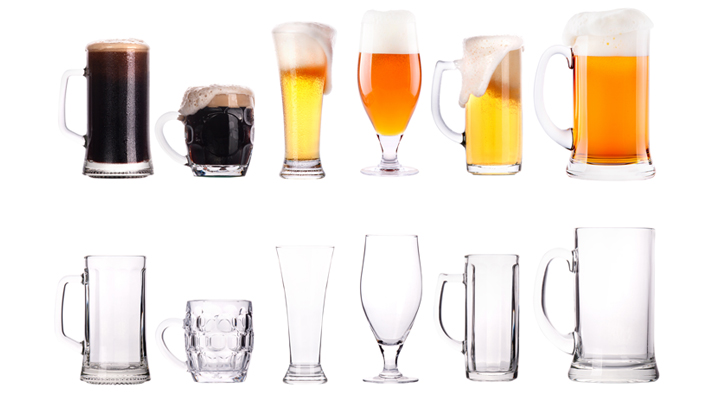 Mug shots
So you’re throwing a party and there will be plenty of beer drinkers. Instead of handing out a stack of disposable cups to the unfortunate lot, we suggest you stock your home bar with appropriate glassware. But first: Do you know your Weizen from your Tulip, and your Snifter from your Pilsner? Sure you don’t since there are over a dozen types of beer glasses that come in all shapes and sizes. For starters, we suggest you stick to a few trusty varieties like the long, lean Pilsner and the sturdy German mug. Should Belgian ales be on the menu, don’t forget the wide-bowled stemmed Snifter or the Tulip. If you plan to go all out, you might as well throw in some Weizen glasses; these long, thin-walled glasses are perfect for Bavarian beers.
Get it right: After using mild dishwashing soap on your beer glassware, leave them to dry on their own. Manually wiping them with a towel leaves tiny fibres and dust behind. Heads up
Pouring beer into a glass doesn’t seem very complicated. But like we said, the process of drinking beer in the correct manner is an art in itself. A proper pour brings out the taste and aroma of fine brews. So if you’ve never really liked froth on your beer, you’ve been doing it wrong. Pour the beer from a height of roughly three centimetres above the glass so as to get maximum head.
Get it right: The key here is that it should be poured as a steady stream.
At the risk of turning you into something akin to a snooty connoisseur, we can’t help but point out one last thing. When you take a sip, breathe in through your nose to get a wholesome aromatic whiff of your freshly poured glass of beer.

5 expensive cocktails from around the world