Floyd Cardoz
Winner of Bravo’s Top Chef Masters, Season 3, Floyd Cardoz was the executive chef of North End Grill, an American grill and bar managed by Danny Meyer’s Union Square Hospitality Group, until last year. He left this position to undertake culinary projects that tread back to his origins of cooking with Indian flavours and work on his upcoming cookbook, Artisan. In the past, he has also been the executive chef and partner at Tabla, a restaurant that created a unique fusion of spices native to India with Western techniques. Recipient of numerous awards, Cardoz was among the Top 50 Most Influential Global Indians, a list compiled by GQ India.

Jehangir Mehta
After a highly successful stint at popular New York restaurants like Compass, Jean-Georges and Aix, Jehangir Mehta opened Graffiti Food & Wine Bar in the East Village of New York City. This is where the unorthodox, intelligent and eloquent chef creates some of New York’s most innovative dishes that have found a mention in several reputed publications. A runner-up on Food Network’s The Next Iron Chef, Jehangir is also part of numerous events with children such as Gastro-Kids After-School, which promotes healthy eating among kids, and Candy Camp. While Graffiti is inspired by Asian flavours, he has another signature restaurant under his name called Mehtaphor which redefines global cuisine. Hari Nayak
A highly sought-after chef in the US today, Hari Nayak has been able to create a modern outlook on Indian gastronomy and broken the perception that the preparation of Indian dishes is complex. He is truly multifaceted—a chef, an author, a restaurateur and a culinary consultant among other things. He is the co-author of the bestseller Modern Indian Cooking (along with another renowned Indian chef Vikas Khanna), and is currently working on other books like My India – A journey through Culture and Cuisine and Modern Entertaining.

Vikas Khanna
Rockstar Vikas Khanna’s journey from Amritsar to America has been very intriguing. This award-winning Indian chef learnt the nuances of Indian cooking from his grandmother. He was awarded The Michelin Star for his restaurant Junoon which is based out of New York City. In addition to being a world-renowned chef and restaurateur, he is also a very popular cookbook author. He is also the founder of organisations like South Asian Kid’s Infinite Vision and Cooking for Life that hosts many gastronomical events in support of social causes. 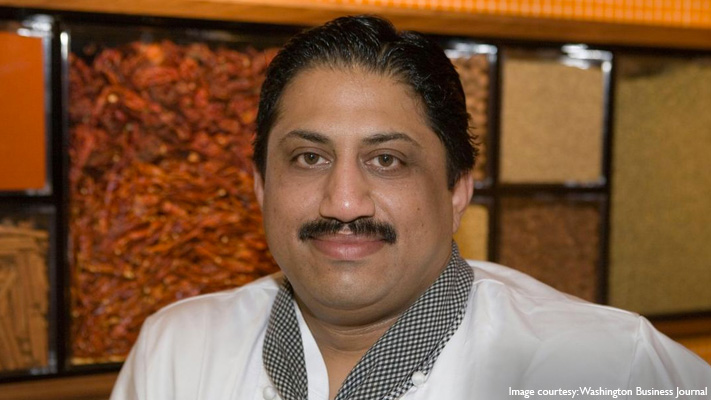 Vikram Sunderam
A Mumbaite, Vikram Sunderam started his career with the Taj Group of Hotels. Before leapfrogging to Washington, he was associated with the award-winning Bombay Brasserie in London. In Washington, he joined hands with restaurateur Ashok Bajaj to open the Indian restaurant Rasika, which has also played host to the Obama family. He has been nominated thrice for ‘Best chef: Mid-Atlantic’ at the James Beard Awards, finally winning it last year. This is a huge honour as these awards are considered to be the Oscars of the US food and beverage industry. Vishwesh Bhatt
The saga of Vishwesh Bhatt is quite interesting. This Gujarat-raised chef was a student at the University of Kentucky where he started preparing his own food to cut down on his cafeteria cost. This need of the hour soon turned into an illustrious career. He soon joined hands with Chef John Currence at City Grocery in Oxford, Mississippi. Under his parent brand, Bhatt opened Snackbar, which brings together Southern and subcontinental cuisine into his signature dishes. He has been nominated for this year’s James Beard Award.

A Peek at the World’s Most Expensive Classic Cars