An Icon Redesigned
The Mini has always been seen as a design marvel, never a convenient car for a family to drive around in. The Countryman has changed that perception once and for all. It’s a proper, four-seater car for adults. But does that mean the renowned design has been compromised? It isn’t squarish any more, meaning the box design principle has been tampered with. The high stance and the elongated length mean that the Countryman is a total crossover now. I see it as graduation from being a teen to a man. It might have become brawny over decades, but the peculiar grin on the grill, made popular by the Mark 1 Mini, still stands it out. The circular headlamps and overall curves all highlight the distinct pedigree of the car.
Inside The Countryman
The most appealing thing about the interior of the car is the roundish central console. It looks straight out of Douglas Adams’ science fiction. The interior talks loudly with you about the extravagant design from the ’70s. Although space has been efficiently utilised. Some of the ergonomics are illogical. For instance, markers on the auto transmission gearbox are marked towards the front passenger and not the driver. The best part about interiors is the room, both in front and behind. The cabin is spacious and airy, and the double sunroof just adds more drama to the space. The rear seats can be reclined and pulled and pushed much like the front seat, meaning it isn’t merely a driver’s car. 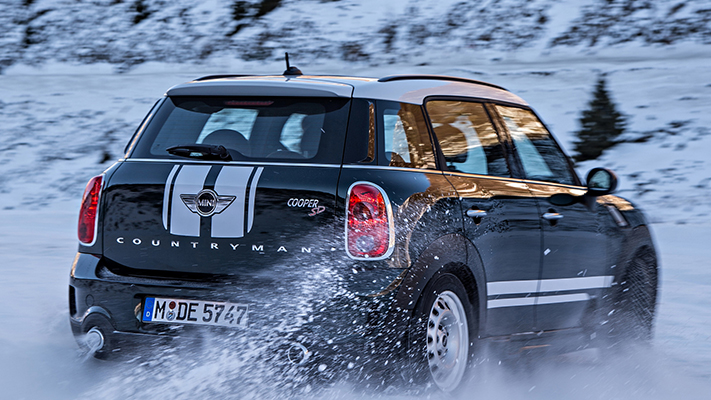 Experiencing The Performance
It stands taller and wider than its previous avatar, the Clubman. The high ground clearance, and four-wheel drive (optional) has made it a serious off-roading crossover. The Gurgaon-Delhi MG Road is barely a crossover’s true test, but I went for a spin anyway. When I sat behind the wheel of the diesel-powered Countryman, identified by a ‘Cooper D’ badge at the rear, I knew about the rally instincts of this car. My mind went back to 1961 when John Cooper, builder of Formula One and rally cars, joined hands with Mini designer Sir Alec Issigonis to bring out the Mini Cooper and Mini Cooper S—a deadly concoction of looks and performance. MG Road was nothing less than Monte Carlo in the rally days of the 1960s. The Mini Cooper was reliving the history, managing to impress everyone around, with power and looks. With 1.6l diesel under the hood it manages 0-100 in 11 seconds. Of course, this is an underpowered Countryman. The more aggressive and wilder sibling Cooper S, does the same in roughly seven seconds. On city roads, I never felt that difference. 112 horses and 270Nm of torque was what not many cars on that particular stretch had. Those who did, didn’t have the looks. Ideally, I’d be in the Cooper S, and not Cooper D, but again this was no Monte Carlo rally. The Countryman is 100-odd kg heavier than the classic three-door variant, hence the cornering isn’t as flawless as one would expect from the Cooper, with her throwing a lot of weight around. I was sitting higher up compared with the Cooper S, again earning me some road presence and an ego boost. Even though the Countryman is taller than some of its predecessors, it really isn’t very tall like the other crossovers. In fact, some sedans sit higher up than the Countryman. That explains the low centre of gravity and inseparable grip on the road. Whatever power I thought it was lacking thanks to its heavier, bigger build, was made up for by the ‘sports mode’ button. On pressing it, the suspensions became stiff, the engine roared like an ageing king, and I was getting my right of passage through a crowd enamoured by the presence of the icon amidst them.
I ended up at Qutub Minar, the 17th century Mughal monument. Time machines may or may not be for real, but the Countryman is one for sure.

The most expensive players at the IPL 2015