7 Most inspirational sportsmen in the world

The Style Advisor
0 COMMENT
1399 Views
The Label goes back briefly into the past to dig up fascinating stories of inspiring sportsmen. Michael Jordan
Even after having retired from basketball more than a decade ago, Michael Jordan is still regarded as the best basketball player in the world. The NBA website matter-of-factly states, “By acclamation, Michael Jordan is the greatest basketball player of all time”. His average score of 32.0 is still untouched, but what most people do not know is that he faced many trials along the way. When he was in high school, he was not given a spot on the basketball team. But he worked hard during the three-month summer break and came back with a bang. When his popularity was growing, he faced a freeze-out by the senior players. Inspite of these infractions, he has won the ‘Most Valuable Player’ title five times, ten All-NBA First Team designations, nine All-Defensive First Team honours, three All-Star Game MVP Awards, ten scoring titles, three steals titles and the 1988 NBA Defensive Player of the Year Award while leading his team to six world championships. Well, if that’s not inspiring, we don’t know what is! 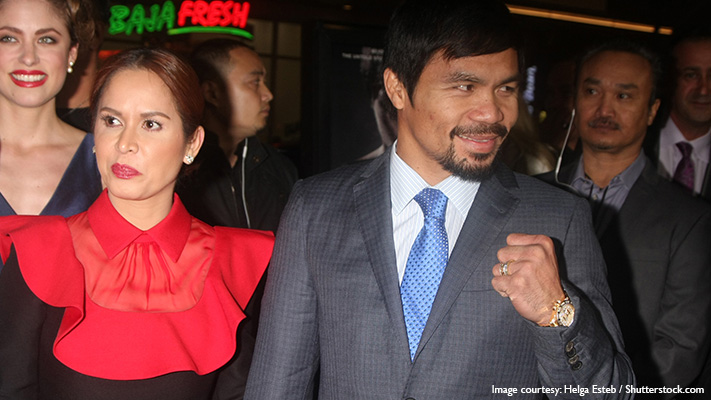 Emmanuel “Manny” Dapidran Pacquiao
This Filipino boxer’s amazing exploits in the ring do not tell the inspiring story of his rise to fame and his triumph over troubled early years. Having won 10 world titles and currently being the only boxer to achieve eight division world champion titles, he is today also the second-highest paid sportsman in the world. He has been named ‘Fighter of the Decade’ for the 2000s by the World Boxing Council, the World Boxing Federation and the Boxing Writers Association of America. Back in the Philippines, he is a politician and has been voted into the House of Representatives for two consecutive terms. He is also a singer, a basketball player and businessman, and he is loved by millions, as was obvious from the reactions during the recent fight against Mayweather! Cassius Clay aka Muhammad Ali
This American boxer leads the list of the greatest heavyweight boxers in sports history. Known to stand by his convictions, he first won the world heavyweight championship at 22 years of age by defeating Sonny Liston in an unforeseen upset. Three years later, his refusal to get drafted into the army saw him lose his title; he was arrested but fought his battle in the courts, and finally, three years later, he won an appeal at the Supreme Court. Losing four years, he came back to the ring and won the coveted title again, proving true his nickname, ‘The Greatest’. He has been the only one to have won the Lineal World Heavyweight Championship three times.

Lionel Messi
Just as the name suggests, he is not to be messed with! As a kid, he was diagnosed with a hormonal deficiency, but he stood up to it and learnt to work around his weakness. Being the shortest in his team, he has taught the soccer world that being brilliant is not about how tall you physically stand—it’s about how fast you move your feet, the brilliance with which you conquer your opponent, and the decisions you make in the instant when the ball is at your feet and you are surrounded by opponents. The only player to have held top score in four consecutive Champions League seasons, he also holds the record for most hat-tricks scored in the Champions League. In 2009, at the age of just 22, he won the FIFA World Player of the Year award as well as the Ballon d’Or award, which he won again in 2010, 2011 and 2012. More recently, in 2014, he became the all-time lead goal scorer in the UEFA Champions League. Tiger Woods
This American golf sensation has been the world champion 15 times starting in 1997—barely a year after he became a professional golfer. During the 1990s, he dominated the sport, spending almost the whole decade at the number one spot. He once said that while growing up, he was never the most talented, the biggest or the fastest. The one thing he had was his work ethic, and that is what has gotten him so far. He is an inspiration to young golfers, with his incredible technique and unparalleled energy levels. Babe Ruth
George Herman Ruth Junior had a tough childhood, some would say, having been sent to St. Mary’s Industrial School for Boys when he was just seven years old. Here, under the guidance of Brother Matthias, he developed a liking for baseball. In 1994, it was Brother Matthias who invited Jack Dunn of the Baltimore Orioles to watch Ruth Jr play. The rest, as they say, is history—with one little variation: when the Orioles players saw Ruth Jr, they started calling him ‘Jack’s newest babe’, and the name stuck. In a career spanning more than 20 years, he transformed from a good pitcher into an even better batter. Setting records that were unprecedented in the ‘dead-ball era’ of baseball, he was a major contributing factor in ushering in the ‘live-ball era’ of the game. Ruth raked up 714 home runs and a slugging percentage of 0.690, a record which still stands. With his big swings and long home runs, he changed the way people viewed baseball, from a slow game of strategy to a fast game where home runs became the deciding factor between winning and losing. Sachin Tendulkar
Sachin Tendulkar is often regarded as the ‘God of Cricket’ and has redefined statistics in the game during his 25-year career. He started off his international career as a 16-year-old on the Indian cricket squad playing against Pakistan in Karachi. He is the only one to have scored 100 centuries in international cricket. He was the first batsman to score a double century in an ODI match. He also holds the record for the most number of runs scored in both the ODI and Test format and the only player to have scored more than 30,000 runs. He is a recipient of the Bharat Ratna, the highest civilian honour in the country. Wisden Cricketer’s Almanack ranked him as the second-best Test batsman in the world after Don Bradman and later as the second best ODI batsman after Viv Richards!
Click here for sporty polo shirts and here for shorts.