The Style Advisor
0 COMMENT
1046 Views
There are foodies and then there are foodies. It is human nature to get bored of the mundane. But with these delicacies, you are just pushing the limits since it could very well be your last meal.  It’s like you relish each morsel of these delicacies under the grim reaper’s watchful eye. Fugu fish, Japan
No ‘deadly delicacies’ list is complete without Fugu fish or pufferfish. The fugu fish’s liver, intestines and ovaries are known to contain concentrated, and must we add, deadly amounts of a paralytic compound tetrdotoxin. This lethal component is 1200 times more potent than cyanide. And surprise, surprise! There’s no known antidote. Chefs have to undergo rigorous training for at least seven years before they can whip out this delicacy and any chef worth his salt will leave just a smidge of poison in the dish to tantalise the diner’s taste buds!
Sannakji, Korea
This delicacy gives a spin to the phrase – choking on your food. Not much preparation goes in the making of this dish since it is practically served raw. Simply put, sannakji is raw baby octopus doused with sesame oil and is served to you live. Yes, live! So how does it get to feature in this list? Well, the lil sucker’s tentacles keep moving even when severed and retain their gripping power despite being detached from the body, which means they could very well latch on to the back of your throat and cause choking and asphyxiation. This is why chewing your food really, really well helps! African Bullfrog, Namibia
You generally want your meat to be tender. However, you wouldn’t want the same while having the African Bullfrog unless you want kidney failure. It’s all about the timing when it comes to consuming this Namibian delicacy. You must wait until after the third rain, when the frogs have started croaking and have mated at least once. Have a frog that is yet to breed and you risk what the locals call Oshiketakata or kidney failure in plain English. Croak! Err, we meant burp!
Hákarl, Iceland
The national dish of Iceland Hákarl makes it to the lists because sharks don’t have a urinary tract or kidneys, which means that all the waste and toxins in their body are filtered through the skin. Which also means the meat contains insanely high amounts of urea and other toxins. Rotten meat is preferred over fresh Greenland shark meat since fresh meat is poisonous. The meat is cured in a process that involves fermenting it for a good six to 12 weeks and hanging it to dry for four to six months after which it is ready for consumption. 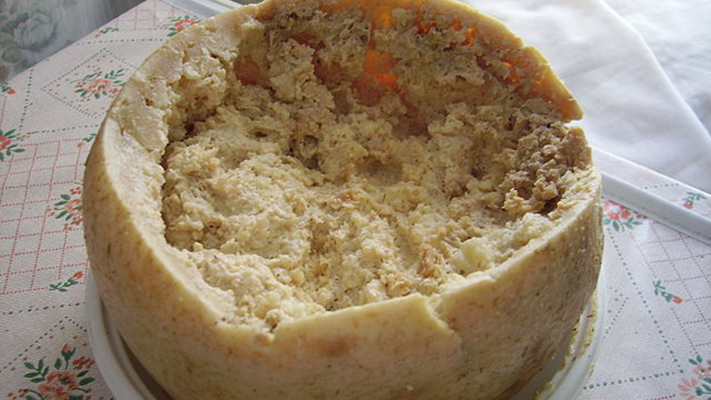 Casu Marzu, Italy
What is rotten, maggot-infested and is yet considered a delicacy? Hint, hint: it involves cheese! Casu Marzu is taking live food to a different level altogether. Cheese is left uncovered out in the open for flies to lay their eggs in it. When the maggots hatch, its show time! The maggots eat the cheese, fermenting and softening the cheese in the process. Banned in almost all of the European Union (understandably so), the cheese is to be consumed along with the live maggots. The cheese is considered too decomposed for human decomposition after the maggots have died. Speaking of the havoc that these nasty buggers can wreak on your intestinal lining is totally unnecessary, we think. Oh and yes, you will need eye protection when you eat this cheese, since these maggots can jump as high as 15 cms straight into your eyeballs.
We plan on sticking to instant noodles for dinner tonight, thank you very much! What about you?

HOW TO PURCHASE A GOLF SET

3 Snacks from Barbeque Nation that you can make at home