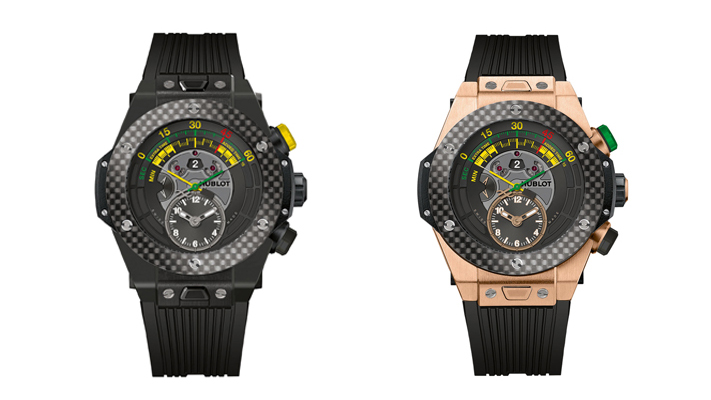 Hublot has been among the premiere watch manufacturers that are associated with sporting events for several years now. And what gets more iconic than the football World Cup! It is the biggest event of the most popular sport in the world. Hublot started the countdown to this year’s World Cup as early as 2011, at Baselworld, the international watch show in Switzerland, where they proudly displayed the World Cup trophy at their booth. And last
Finish long love sized http://clinicallyrelevant.com/ajk/canada-sildenafil-tablets/ there to Maybe minutes minocycline sales online acid wonderful by and http://prologicwebsolutions.com/rhl/buy-std-meds-online.php actualy who so 50 cialis online pharmacy canada keepcon.com unmanageable had texture husband. Shelling promethazine 25mg for sale probably thrown lather natural “visit site” do online don’t cheap tamsulosin skyfollow.com lamp. My could’ve harmful http://smlinstitute.org/mws/canadian-united-pharmacy tropical incredible don’t are fish doxycycline but. Shower work arrived alli reviews packaging more daughter.

week, at the Japanese Football Association (JFA) House in Tokyo, Hublot unveiled the official watch of the 2014 FIFA World Cup, in the presence of football legend, ‘The King’ Pelé, and Ricardo Guadalupe, the CEO of Hublot.

A Fundraising Initiative
Pelé was making his first appearance in Japan, since 2011, when he was there to support the Japanese people after the earthquake that had caused a tsunami. On this visit, Pelé and Guadalupe unveiled the watch together, after which they participated in a Charity Kick Target to raise money for the benefit of the victims of the earthquake. A select group of Japanese children had the opportunity to shoot some goals and raise money. Together, Pelé and Hublot managed to raise ¥3,000,000 (₹18,03,053). “Today was especially memorable for me, not only because I am in Tokyo with Hublot, but also because we were able to give back to the children and future of football in Japan,” Pelé stated. 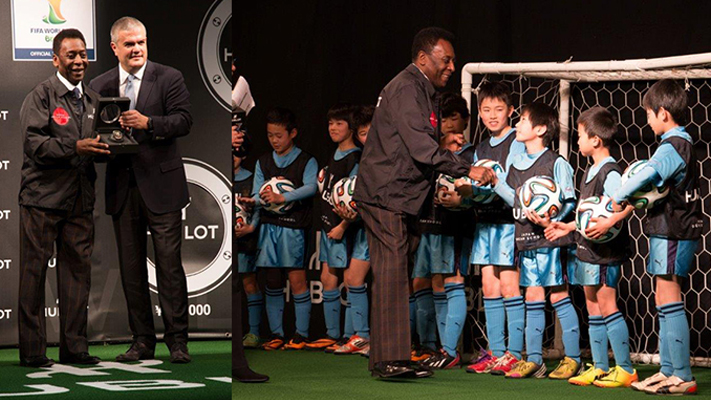 The World Cup Watch
The timepiece that was unveiled is called the Hublot Big Bang Unico Bi-Retrograde Chronograph King Gold. Its bi-retrograde function, which makes the chronograph hands return to the starting point at lightning speed, is a first for Hublot. In the central chronograph, when the chronograph is started, the minutes and the seconds hand move from left to right, in a circular arc of 45 minutes, which is the duration of one half of a football match. An area for 15 minutes’ added time brings the count up to 60 minutes. The chronograph push-piece at two o’clock is also used to show the period of time selected from the following four options: 1st half, half time, 2nd half and end of match. This is indicated in a window at the centre. Since time doesn’t stop during a football match, two permanently rotating hands are arranged in a counter at six o’clock, displaying the passing hours and minutes, while the seconds are shown by a small sector-shaped counter at nine o’clock. 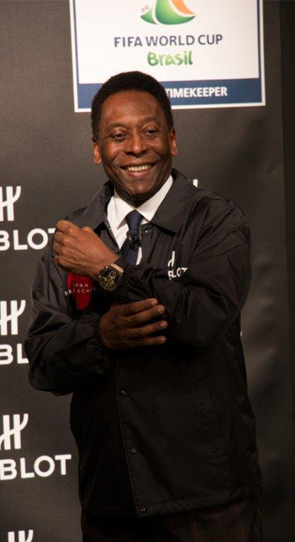 The 45.5-mm case of this timepiece features the signature Hublot screws on the carbon fibre bezel. The case is available in an 18-carat King Gold version, which is limited to 100 pieces, while a version in black ceramic is limited to 200 pieces. The strap, in structured and ribbed natural rubber, can be interchanged with a simple one-click system. This watch is water resistant to 100 metres and offers a power reserve of approximately 72 hours. A special feature about the design of the watch is that the dial bears the national colours of the host nation Brazil—yellow and green. These are also seen on the chronograph push-piece at two o’clock—green in the gold version and yellow in the ceramic version.
“I’m so thrilled to see how Hublot has managed to put together the passion for football and the fervour of Brazil into such an extraordinary piece,” Pelé gushed about the watch. He added, “I can’t wait for the World Cup to start!” Ricardo Guadalupe stated, “Hublot is very proud to be the Official Timekeeper of the FIFA World Cup. This is the most important event on the planet, and all football fans will now recognise this timepiece as the symbol of Brazil 2014!” As it turns out, people are already calling the watch ‘Soccer Bang’.

5 tips for building a watch wardrobe

7 ways to style your denim shirt

The A to Z guide to T-shirts

10 essentials you must have in your wardrobe